We have our first look at Guy Ritchie’s foray into the fantasy realm, featuring our favorite national park.

Principle photography of King Arthur: Legend of the Sword took place in Beddegelert, Vivan Quarry near Llanberis and Capel Curig in Conwy over the period of May 2015. The film is slated for a 24th March 2017 release is still a way off. However Guy Ritchie has finally released the first images of lead actors Charlie Hunnam and Jude Law in full costume, if you look in the background you can see the Snowdonia mountain ranges and cliff-faces.

Snowdonia’s fantastical landscape lends itself to the mythological vibe perfectly, and this has been capitalised on in the past, with scenes from major Hollywood blockbusters such as ‘Dragon Slayer’, ‘Willow’, ‘Clash of the Titans’, ‘Robin Hood’ and ‘Tomb Raider 2: The Cradle of Life’.

This is the perfect filming location for a King Arthur production, as many legends surrounding his adventures are actually set in the area. The Mabiginon is a collection of Welsh myths and folk-tales, and features many Arthurian Stories in various locations over North Wales. It is even said that King Arthur himself is buried within the stone walls of Snowdon’s neighbouring Lliwedd peak.

We’re not yet sure what direction this re-telling of Arthur’s adventures will take plot-wise, but we do know he will be battling Vortigern (played by Law), an infamous 5th century warlord and a leader among the Britons.

Speaking about his portrayal of King Arthur, Hunnam said ‘He’s a bit rough around the edges, but he’s basically a survivor’. This King Arthur is a little different to how we might now the character, as a down to earth, streetwise character, rather than an out-of-touch lordly king as he can be portrayed “There’s definitely a harder edge than people would imagine”.

The movie is created with the possibility of a Launchpad for a franchise, so if all goes well, maybe Ritchie will be back in the area shooting the sequel in years to come. Only time will tell.

You can see the sights included in this new feature with a well deserved trip to Snowdonia national park. If you’re looking for somewhere to stay, Morfa Lodge Holiday Parks North Wales is set amidst 12 acres of rich woodland in the heart of snowdonia, and only a short journey to some of these stunning locations. 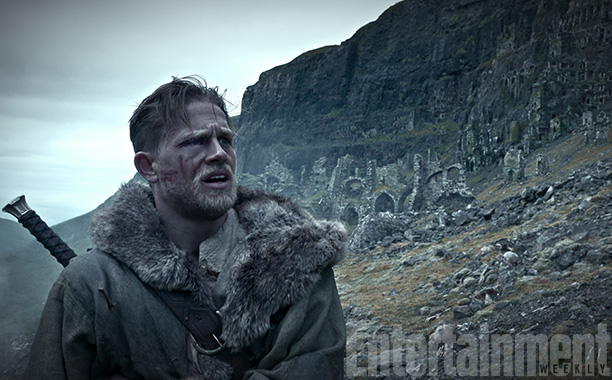 Charlie Hunnam in medieval garb, venturing through the mountains on his mysterious quest. – Picture from Entertainment Weekly

This entry was posted in Activities, Attractions, Events, Local Information. Bookmark the permalink.